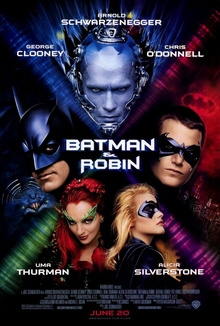 Live from the Batcave!

During my time with QVC I had countless incredible experiences all across the country, but perhaps nothing can top the time I got to direct the Second Unit of ‘Batman & Robin’ and guide the special effects crew in the top secret location for the Batcave. Warner Bros. handed us the keys to a $10 Million movie set, and believe me, I made the most of it!

At the time, this was the most expensive movie set in the world… outdone only by James Cameron and company with ‘Titanic,’ which filmed just south of the border in Mexico.

We were all sworn to secrecy about the top secret digs where the shoot was held. So, two decades later, now I can finally reveal the Batcave was actually located in the Spruce Goose Hangar next to the Queen Mary in Long Beach, CA. That summer was a magical time in LA….I actually remember listening to Ryan Seacrest on the radio there as he played the top hits at the time, “Steal My Sunshine” by Len and “How Bizarre” by OMC.

Needless to say, for me, I was a kid in a candy store the entire weekend we got to film all over the extensive sets and play with the actual Batmobile itself! It took a massive crain to lower the Batmobile onto the giant turntable on the set. I was in charge of the special effects crew who used broken mirrors in water swishing around to create the effect of water shadows on the Batcave walls. I also directed George Clooney’s stunt double for the many scenes we created and promos we produced there. Another once-in-a-lifetime experience I can thank my lucky stars for getting to do!

Come to think of it, though, maybe all those broken mirrors led to all the bad luck that movie encountered at the box office!