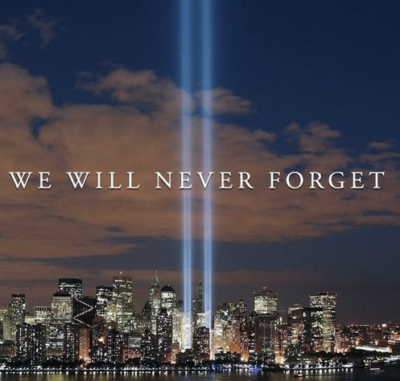 The attacks of September 11th left real scars all over this great country,  including in Houston.

Ironically, those of us on ‘The Debra Duncan Show’ actually made TV history during 9/11 without knowing it.
We were the only talk show in America completely in production during the attacks. As producer, I had looked ahead at the date- 9.11- and decided to plan for a fun makeover show that day called ‘9-1-1 Fashion Emergency!’ We had shot a fun soap opera skit the day before titled ‘Fashionable Hospital,’ and I was up until after Midnight on 9/10 editing the mammoth project. On the morning of 9/11, we proceeded to seat the audience and begin the show– knowing that a possible tragic accident had hit the World Trade Center in New York. National news took over programming, but rather than scrap all the hard work we had put in we proceeded to go live-to-tape with the show as planned. An hour later we started to hear horrible things, but we still didn’t know what was really going on. It was a little like being trapped in a media blackout bubble. I pushed us through until the show was completed.

Then, immediately following our taping, a camera crew led by weekend news anchor Bob Boudreaux entered the studio and locked the doors. The former Vietnam vet made a stark announcement to the stunned studio audience: “Our country is under attack!” He called our attention to the TV monitors and began filming our reactions as we saw the Twin Towers come down in the monitors. The dramatic, shocking, weeping reactions captured were raw and very real. It was taking advantage of an unusual circumstance.

Nevertheless, like everyone in America, we were never the same again after that tragic day. And little did any of our production crew know that those attacks would eventually trickle down to the loss of our show– since the following year Disney decided to trim its broadcast budget due to the overwhelming losses from its theme parks. Our Buena Vista Television project was caught in the crossfire.

Exactly one month after 9/11, I produced a prime time special for ABC on 10/11/01 called ’Terror: What Next?” With the terror attacks still fresh in everyone’s minds, I edited these stings for the show. We also coined a phrase used everywhere now: “We will never forget.” Today, these iconic images still resonate with strong emotions and pack a powerful punch. Here’s a look back at excerpts from the original broadcast showing the pain, shock, and dedication at Ground Zero, while also displaying the confusion and anxiety over what might happen next. Although painful to watch, the video does make that tragic day impossible to forget.

Now, some 17 years later, we are still saying the same thing we said then: “We’ll never forget.”