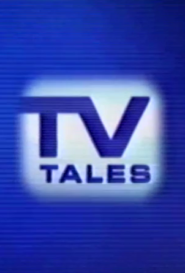 A Tour of ‘TV Tales’

Ever wonder how Hollywood shows come together? …How the sausage is made in the factory by the ‘man behind the curtain?’

Well, at E! it was an extensive process. We had six-figure single episode budgets to manage, staffs to run, and deadlines to meet— one way or another. It’s life in a high pressure cooker for sure! I’ll never forget the first time I met the head of E! Entertainment Television: Lee Masters. He was a programming pioneer— already famous for his innovations at MTV— and a true TV genius. I considered it an honor to stir up Hollywood’s secrets and reveal them to the world by creating compelling shows. I was there at E! when host John Henson kept the control room busted up laughing so hard it was difficult to finish punching an episode of ‘Talk Soup’ back in those days. I also remember Cindy Taylor’s first day at the network when she had been selected out of 10,000 hopefuls to be the new host of ‘Wild On.’ I’ll never forget hanging with Elizabeth Shue and Joshua Jackson at the Hollywood premiere of ‘Gossip’ as well. From interviewing stars on the red carpet to meeting them on special projects like the E! series, ‘In Your Dreams with Cindy Margolis’– where I met and hung out with super cool celebs like Sugar Ray’s Mark McGrath, I was lucky to be part of some amazing projects!

THE REALITY OF ANNA NICOLE

But the tide was turning when I was at E!. After the network brass had turned down a history-making hit called ‘The Osbournes’ which exploded into major success for MTV, a new team of execs showed up. Reality shows became the bandwagon TV networks wanted to hop on in a hurry. Consequently, I was there when Anna Nicole Smith came waltzing in one day with her attorney Howard K. Stern to seal the deal for her new reality show. (My desk was right outside the office of ‘THS’ creator and VP of Programming Jeff Shore.) It was commonplace to see Anna blowing kisses to all across the front courtyard as she rolled up in her huge white stretch limo, and she would even parade through editing bays as she and Howard conspired to preview her upcoming episodes.

Yet, Anna’s success on the network was paved by her THS. A little known fact about the ratings: the highest-rated True Hollywood Story of all time was OJ Simpson. But, the second highest-rated THS was Anna Nicole Smith’s story.

While I enjoyed producing for shows at E! like ‘THS,’ ‘TV Tales,’ ‘Celebrity Profile,’ and more— and working Live Events like red carpet premieres and crashing A-list parties, I saw the Reality TV trend writing on the wall. Sure enough, frequent ‘Talk Soup’ host reject— Ryan Seacrest— brought in the Kardashians— and the rest, as they say, is history. 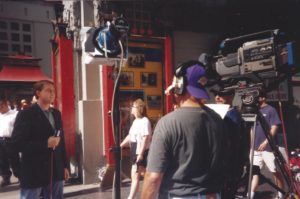 E! News Daily was an extension of the Live Events department carrying all the hottest buzz right off the red carpet!

When E! rolled out a new series called ‘TV Tales’—a series dedicated to digging up facts and secrets behind some of TV’s most classic shows, my first assignment was the classic 70s show, ‘One Day At A Time.’

When I started producing “TV Tales: One Day At A Time,” we were on a strict production deadline, but I learned firsthand how projects can be killed by talent at the drop of a hat. At the time, Valerie Bertinelli had filed for divorce from Eddie Van Halen and was stealing headlines, though still on location in Utah in production with ‘Touched By An Angel.’ She definitely didn’t want to talk about it. Still, former SAG president and original ‘One Day At A Time’ cast member Richard Masur was totally onboard. Then we secured other interviews which were going to fill out the show nicely until Bonnie Franklin put her foot down and refused to revisit the past. Franklin was only willing to do an interview to talk about ‘anything but’ One Day At A Time—the show which actually made her a star and gave us any reason to talk to her in the first place! That’s the whacky world of LaLa Land, though.

Fortunately, my show on ‘Charlie’s Angels’ didn’t suffer that same fate. In fact, it was the first time all six original Angels sat down for an exclusive interview to spill their secrets. Our fortunes for this special turned when out of the blue, Farrah Fawcett granted a sit-down request during a set visit for the CBS series ‘The Guardian’ in 2002. After that breakthrough, the rest of the Angels fell in line without too much fanfare– though a little drama and negotiating along the way. 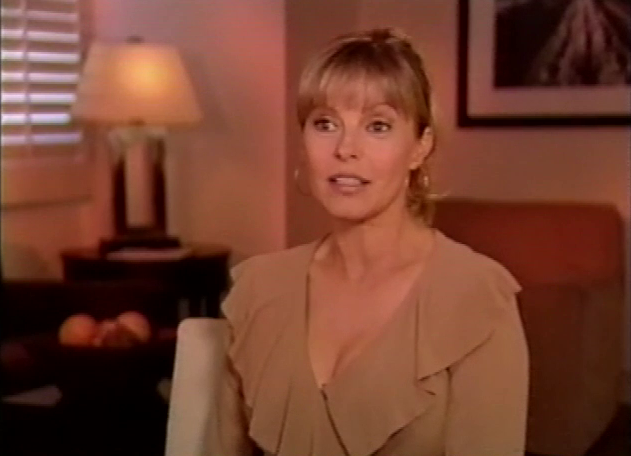 Living like an Angel……Cheryl Ladd pretty much steals the show in TV Tales….But, E! had to pick up the tab for hair & makeup for each Angel’s interview– to the tune of thousands of dollars in a couple of cases! For Cheryl, we also rented a huge suite at the W Hotel in Westwood and hired a stretch limo to pick her up and transport her in from Santa Barbara.

For your viewing pleasure, here’s a rare look at my ‘Producer’s cut’ of the two-hour E! “TV Tales: Charlie’s Angels,” which first aired nationally in December 2002. Note: you’ll notice clips containing timecode windows at different intervals. That’s because when we produced ‘THS’ and ‘TV Tales’ we created rough cuts containing the material we wanted, but we were still waiting for ‘Rights and Clearances’ to clear the material for final broadcast and secure a five-year recurring broadcast license. As it turned out, several Playboy items originally slated for the show got axed. Also absent here is the final music for the piece— which is quite noticeable in places since it demonstrates just how vital a role music plays in telling any story. 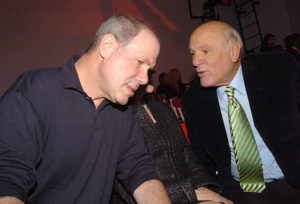 Dynamic Duo….Michael Eisner and Barry Diller circa 2004. Did the two broadcast behemoths put a curse on ‘Charlie’s Angels?’

Two of the powerful Hollywood heavyweights who reportedly laughed off the original pitch for ‘Charlie’s Angels’ turned out to be Barry Diller and Michael Eisner– as we share in this TV Tale. As fate would have it, I personally worked underneath both men years before producing this TV doc. I joined the TV crew at QVC on the ‘Quest for America’s Best,’ which was the last project under former QVC CEO Mr. Diller before he left the network– after infamously losing his bid for Paramount to Viacom’s Sumner Redstone. Back then, Diller captivated the world with his unforgettable press release afterward: “They won. We lost. Next.” Then, at ABC, I produced ‘The Debra Duncan Show,’ which Mr. Eisner kept an eye on while running the entire Disney empire. He even came to Houston and paid a visit to Ms. Duncan on the set. So, I had my own Diller-Eisner connection in a roundabout manner. 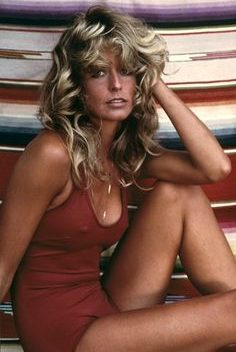 Finding Farrah…Locating archive footage of the ‘Farrah Phenomenon’ was an intense task in producing this special.

As I interviewed the various Angels and subjects for this show, I have to say what a thrill it was to visit one of the most powerful men in Hollywood history— Aaron Spelling. I didn’t have to go far to meet him, either; his office was literally a stone’s throw across the courtyard from E! on Wilshire. Though Mr. Spelling was still dealing with his ongoing illness, he was quite captivating. (I loved seeing his full-scale model of ‘The Love Boat’ on his desk, too!) As it turned out, my interview with him was one of the last formal sit-downs he gave before his legendary life ended. The same was true for former Hollywood power agent Jay Bernstein.

THE HOUSE OF PLAYBOY AND DICAPRIO

Then, of course, there was the post-production period for this show….when the biggest movie star in the world and the infamous Playboy Mansion’s grotto entered the picture. You see, we were not only battling the usual harsh deadlines to get clearances on a lot of archive materials, but my production team was also dealing with daily distractions from the paparazzi. That’s because my young and very beautiful production assistant– Jennifer Paulsen– got caught up in the headlines of the day. 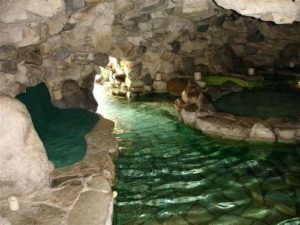 If these stones could talk!…The Playboy Mansion’s grotto where Leo DiCaprio has been rumored to play ‘nice’ with new playmates on multiple occasions.

During Leonardo DiCaprio’s roaming period between supermodel girlfriends Gisele Bündchen and Bar Refaeli, he reportedly landed a new playmate in the form of my PA who attended the Halloween party at the Playboy Mansion in 2002. Tabloids from the New York Daily News to even CNN reported the juicy gossip of Leo leaving the mansion “arm in arm with E! production assistant Jennifer Paulsen” and that the two were now dating. Later on, she did confirm to me the infamous grotto was involved in their encounter. My ‘flying high social butterfly’ PA told me Leo was wearing a mask at the party, so she didn’t know who the masked man really was until later that night. While Jen assured me the whole evening was quite innocent….save for some ‘making out,’ the tabloid feeding frenzy that followed was relentless. To this day, even Leo’s biography mentions the tabloid fiasco of the period. Although Jen had a famous father and lived in a beautiful home in Beverly Hills, she was very down to earth and a really sweet girl. To me, she was too good for the likes of the Playboy Mansion crowd.

But soon my trusty assistant also started getting calls from a Hollywood director on a private jet. Apparently, this smooth operator turned out to be none other than ‘Rush Hour’ director Brett Ratner! Naturally, Jen gave us the real dirt from all the parties, but to this day we’re sworn to secrecy. Otherwise, this would be another True Hollywood Story all its own! Needless to say, the added drama behind the scenes back then really kept things interesting.

So, here’s a peek behind the curtain at how Hollywood churns out long-form programming and how Tinseltown TV producers make the magic happen– one rough cut at a time!