It may come as a surprise to some, but Houston has a long tradition of being one of the top spots in the nation for comedy. So, it’s no wonder comic stars like Bobby Lee of ‘Mad TV’ visit the Bayou City often. Bobby’s visits have been epic over the years, but he’s just one of many regulars who turn on the after-burners and pump out the laughs when playing Space City. That’s why I developed a regular segment on Great Day called the ‘Comedy Spotlight’ to give voice to the many talented comedians who came to town each week for their usual bookings at The Improv. Comic stars included big talents like Cheech Marin, Frank Caliendo, Kevin Nealon, Rob Schneider, Shawn Wayans, and Tommy Davidson from ‘In Living Color.’ Other regulars were guys like the late Ralphie May who once called the Bayou City home before hitting the big time and moving on to Vegas or Tinseltown.

Here’s one sample of the madness we enjoyed weekly…in the spotlight. 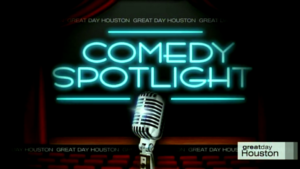