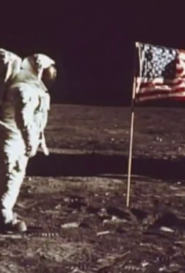 One of my contributions to ‘Great Day Houston’ was developing a regular segment we called ‘Houston: On Location.’ It was a closer look at artifacts and other landmarks around town which appeared in movies shot on location in the Bayou City. As well, we provided a wealth of historical and other background info on the locations and their significance to the city as well. Such was the case when we took Space City, U.S.A. to Space Center Houston next to the Johnson Space Center for the on location story of ‘Apollo 13.’ 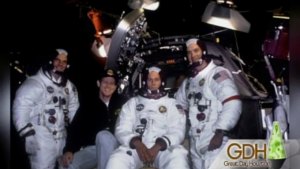 For fans of the movie, a trip to Space Center Houston brings the history to life with real artifacts and space capsules on display there. The exhibitions on display really celebrate all the achievements of the space program, which celebrates a greater triumph of the human spirit in being able to accomplish a safe lunar landing and return mission.

Discussing each location with local historians also brought out interesting facts and tidbits about both the films and the real life locations involved.

In this particular segment, it was part of 70s week we celebrated in 2014, so our host Deborah Duncan dressed the part all week long– including this appearance where she captured a bit of the ‘Superfly’ look. 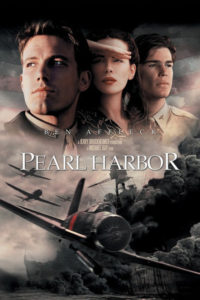 Another great location from this series was featured when we highlighted the ‘Battleship Texas,’ which was a key set prop used in Michael Bay’s “Pearl Harbor.”

The Battleship Texas is a true marvel of military might and strength– the only U.S. battleship remaining which fought in both WW I and WW II. Today, the vessel is struggling to stay afloat– both figuratively and literally. The Texas has been taking on water and suffering major rust and other hazards of aging. A special funding movement is underway to save the battleship and relocate it to a nearby dry dock locale which would be especially designed to save and preserve the vessel. So, these days the ship which survived so many historic battles and even witnessed the iconic taking of Iwo Jima faces a very uncertain future. 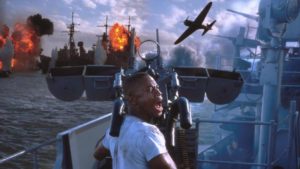 Many of actor Cuba Gooding, Jr.’s scenes in the film were shot aboard the Battleship Texas.

This was my second go-round with telling the story of the historic ship. I first did a memorable shoot there in 2001, just a few months before 9/11. That package can be viewed in my ‘Debra Duncan Show’ projects titled ‘Remember the Heroes.’

Here’s hoping the Battleship Texas remains a glorious artifact of American and Texas history for many generations to come!