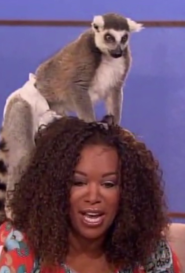 Great Day Houston: Walk on the Wild Side!

They say kids and animals make the best guests for live TV. That certainly was true when I launched ‘Great Day’ by having Country star Clay Walker come on the set with his horse– all the way to the day we had Dr. Brian Staples bring his wild bunch on the set some seven years later.

But first of all, when the ‘Debra Duncan Show’ ended in 2002 and I returned to E! Networks in LA, I never dreamed I would end up back in Houston and working with Deborah hosting a live daily talk show again. But as fate would have it, that’s exactly what happened through a series of events.

When a new programming chief took over KHOU in 2004, he brought me in to see what I knew and if he could work with me. As it turned out, we did a lot of prime time specials and parades together– all with Primary Fusion producing the work. Then in the fall of ’04, I produced a pilot for a new morning talk show there called ‘Houston & Co.’ with host Darian Ward, a former TV personality with Fox. I had already been invited to launch ‘Great Day S.A.’ in my hometown of San Antonio with Lu Parker hosting at KENS-TV, but I declined to return….instead opting for the bigger market of Houston once again. In March 2006, I launched Great Day with host Whitney Casey who was later replaced with Deborah once some contractual items could be worked out.

Then, it was bring on the animals! Literally!

In this segment from 2013, Deborah met the little primate ‘Wilson’ for the first time. Wilson was already quite an accomplished celebrity having starred with Eddie Murphy in ‘Doctor Dolittle.’ Wilson also had encounters with such stars as Neil Patrick Harris and Jason Alexander at the Magic Castle in LA.

But then came the slap heard ’round the world! Wilson took a friendly swipe at Deborah and the footage went viral all over the world! She became a sensation across the pond in tabloids like the Daily Mail!

Deborah actually was gone on a cruise during the big publicity push that followed, but that monkey slap proved to be quite a viral payoff. Even ‘Talk Soup’ at E! covered Wilson’s crazy hi-jinks. Once she returned, we had fun with a little skit we did when we invited Wilson back on the show for him to apologize, but it was Deborah who got a little revenge and the last laugh!

So here also is a look at our hilarious package on Deborah’s revenge against Wilson!

In the end, we kept the entertainment flowing…but most importantly, we continued the message that so many animals in the world actually need saving. Wilson proved to be a great ambassador– and my work just like that of zoologist Dr. Staples has continued to reach out wherever possible to help our furry little friends who have no voice– but desperately need to be heard.