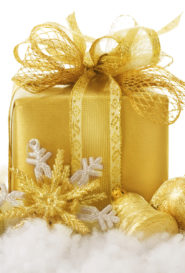 The Holidays are a time for reflection– as well as a time for giving. In this special Christmas edition of The Debra Duncan Show, I produced a program borrowing the title from the story of my all-time favorite film, ‘It’s A Wonderful Life.’ Director Frank Capra based his holiday classic on the short story, “The Greatest Gift.” And so I tell the story of a group of people who share their greatest gifts– and some are simply unbelievable and truly amazing.

A few months earlier in 2000, Disney had brought me in from Los Angeles to make The Debra Duncan Show a little more like ‘Oprah’- to help take the show to the next level. Perhaps the greatest compliment we got from my time there was that this particular episode is even more Oprah than ‘Oprah!’

In ‘My Greatest Gift’ we took the viewer on a journey with some very special guests packed with plenty of tears and genuine surprises throughout the show…but also with a real Christmas miracle at the end none of us could have expected.

The overall theme of the show for me began earlier that summer back in LA…when I read an incredible story in People Magazine about a Christmas Tree farmer from Michigan and what had happened to his daughter. It was unforgettable– and I sort of tucked that story away until months later when it came back to me like a lightning bolt at Christmas time!

Along the way I was able to include one of the sports heroes from my hometown of San Antonio. My first job in TV was writing and directing a local commercial starring NBA All-Star Sean Elliott. I turned him into an elf who was upset because he was a misfit; after all, there aren’t too many elves who are 6’8 and playing professional basketball! But years later, it was a thrill to sit down again with Sean and have him share his personal story. At the time, I was also able to interview NBA Commissioner David Stern who reacted to Sean’s amazing sports comeback from kidney disease.

As I interviewed the Frazier family in putting together their video story, I took an unconventional approach. Instead of just stopping by like a news reporter to get a quick sound bite, I spent extra time with the family– even going with them to their church to get the full emotional impact of what they were going through. That extra investment of time really paid dividends.

‘My Greatest Gift’ was so well-received it became another hit that ABC re-aired the following Christmas…..reaching more people and hopefully helping to make a difference in more lives.

If you want to feel the magic of Christmas, please invest the time and go watch the full movie of ‘It’s A Wonderful Life.’ But if you only have time for a quickie, take 45 minutes and watch ‘My Greatest Gift’ completely through to the end. You’ll be glad you did– and you’ll find a miracle waiting at the end of the story.