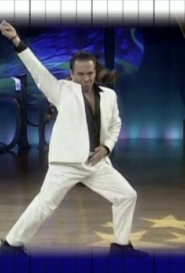 When it comes to filling an hour-long talk show for a hip audience, one thing is very clear: it better be entertaining! And it better grab you from the get-go– here you can check out how I edited a Show Open guaranteed to do just that.

And that’s why I always brought outside-the-box ideas to the ‘Debra Duncan Show’ and turned them into true ratings successes! In 2001, I really struck ratings gold with a summer programming show concept: ‘Dance, Dance, Dance.’

This hour-long show dedicated to nothing but popular dances throughout the decades scored a whopping 7.3 rating! Those kinds of numbers are unheard of for talk shows– and these days, you would never see a number like that. But back then it was a way to program to kids who control the remote when they’re home during the summer break and the Holidays. Keep in mind, this was also long before ‘Dancing with The Stars’ became a thing. (Just maybe we gave the network some ideas….)

But another hallmark of my producing style is on display here by starting off the show with a bang having fire dancers and a native parade provided by Drums of the Pacific, a local Polynesian performance troupe. The open flames set off alarms with the studio engineers since the building’s sprinkler and smoke alarm system had to be dismantled during the taping….as we almost learned the hard way in rehearsal!

People often ask me what’s my favorite 80s song….well, I just had to use that song as the main music bed for the Show Open here– since the tune by The Hooters was tailor-made for this show.

While my friend Shawn Welling and his Planet Funk dance troupe made up the bulk of the entertainers in the show, we had amazing performances from lots of local dance schools and programs, including the Fly Dance Co., the Clear Lake Metropolitan Ballet, Strictly Street Salsa, and the Houston Metropolitan Dance Company. I also produced and edited the video story on a very popular Houston hot spot from the period: Bar Houston.

Since I had traveled all over the country quite extensively, I knew that a certain nightclub chain was very popular in certain cities: Bar Miami, Bar Atlanta (in Buckhead), Bar Charlotte, and of course…Bar New York. Naturally, when I got to Houston and discovered the chain had made its way west to the Bayou City, I just had to do a story on the joint. On the heels of the popular cult film, ‘Coyote Ugly,’ Bar was the perfect venue to showcase the dance craze of the day: dancing on the bar! So, this story fit perfectly into a show all about dance. Here’s the original Show Open I edited along with the Bar Houston piece I did as well.

So here is the original Show Open and the video package on Bar Houston.

The second video contains the whole show. The end product was a program definitely full of entertainment. And I also demonstrated how a huge rating could be attained– without big name guests– all by utilizing and mobilizing local talent. And although we had to dig a raw cut out of some old archives, here’s that cut of the original program.

If this show doesn’t make you want to hop on your feet and get out on the dance floor– you must be dead!

Drums of the Pacific
Performers