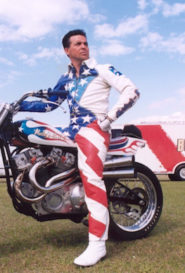 In conducting TV interviews, a producer relies on many tools to draw a viewer into the conversation. Certainly the biggest tool of the trade is the set up package: a background video introduction to a particular guest.

One guest needed little introduction to our viewers: Bubba Blackwell, the American Daredevil. Bubba made quite a splash on our show several months earlier when he did a motorcycle stunt with our show host on live TV– only the stunt turned into a mishap.

Perhaps that should have been an omen for what was to come later that summer– when Bubba would attempt to break a record with a daring daredevil jump on his motorcycle. The jump nearly cost Bubba his life. But when we heard about what had happened, we were able to get a local sponsor to pitch in and surprise Bubba with a donated trip back to his home in Mississippi with the proper breathing equipment on board as he recuperated from the tragic accident. We surprised Bubba with the news during a live interview from his hospital bed in San Diego.

So, here is the set up package leading up to Bubba’s big surprise. Here you can see how a dramatic video story can build up an interview like few other tools– definitely filled with drama and tension.

Bubba gave us a really great quote both times he was on our show. It has always remained with me– and I know a lot of people touched by Bubba have taken it to heart as well when considering the risks we take and the way we go about daily lives:

“Everybody dies….but not everybody lives.”

I’m happy to report these days Bubba is back in his cycle seat…..making jumps and shooting for other thrills– while still trying to avoid those nasty spills!