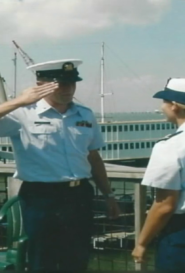 It’s our nature as Texans to proudly honor our U.S. military service men and women who paid the price for our many freedoms today. Some gave much, and some gave all. As the grandson of a WWII vet, I naturally have a special place in my heart for all our military heroes– both past and present. So, I try to let that sense of honor and reverence shine forth in the packages I’ve produced about our fallen heroes.

Seawolf Park in Galveston has stood for decades as a memorial tribute to the USS Seawolf submarine sunk during WWII. As a little boy, my great-grandmother took me there often, and I have so many fond memories of touring the grounds there and playing in that park as a child. That’s what brought me back as an adult many years later to cover the ongoing restorations at the park and to showcase the amazing WWII artifacts on display there: the USS Cavalla and USS Stewart.

So many historical buildings and bygone era items have vanished from Galveston’s once proud past. When I was a child, I loved making the trip to Galveston just so we could visit Sea Arama….a precursor to Sea World. It was an astonishing marine and entertainment park that was about as close to paradise as you could get for a kid. Today, all that remains of Sea Arama is an empty field where much of the park once stood. The same is true of Astroworld, a once-celebrated amusement park, which was also built in the ’60s near the Astrodome in Houston.

So, just having what’s left of Seawolf Park around is a small victory for those of us who grew up visiting this special, almost sacred place.

If you get a chance to visit Seawolf Park on Pelican Island in Galveston, by all means make the trip! But whenever you visit, just remember….Seawolf Park stands as a solemn reminder to all of us that freedom isn’t free. And sadly, nothing lasts forever.