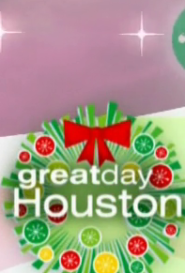 Celebrating the Yuletide Season ‘the Lone Star way’ was an annual tradition on ‘Great Day Houston.’ As a professional musician, I have great respect for all the local artists who are actively carving their niche in the Houston music scene. So to showcase that local talent, we presented a collection of Texas artists providing holiday tunes for the GDH audience.

We led off the show with a giant in Houston music circles– Sheila Marshall, who’s been endorsed by some real Texas musical legends including Willie Nelson. Another rising star on the Texas Music charts is Kimberly Dunn, who hails from my hometown of San Antonio. In a chance encounter, I caught Kimberly singing at the House of Blues- Houston one night in the main dining room, and I knew we just had to have her on the show! It wasn’t long before she made her GDH debut. Since her GDH performances, Kimberly’s stock in the Texas music scene has continued to rise and she’s well on her way to becoming a big star.

Some former ‘American Idol’ standouts are also included here like Will Makar and Tory Tompkins!

Also, some of the celebrities like Mayim Bialik, Emmitt Smith, Nolan Ryan, and Tommy Davidson who stopped by during the year share their favorite holiday memories in between songs.

So, grab your eggnog and get ready to stuff your stocking with these holiday treats!