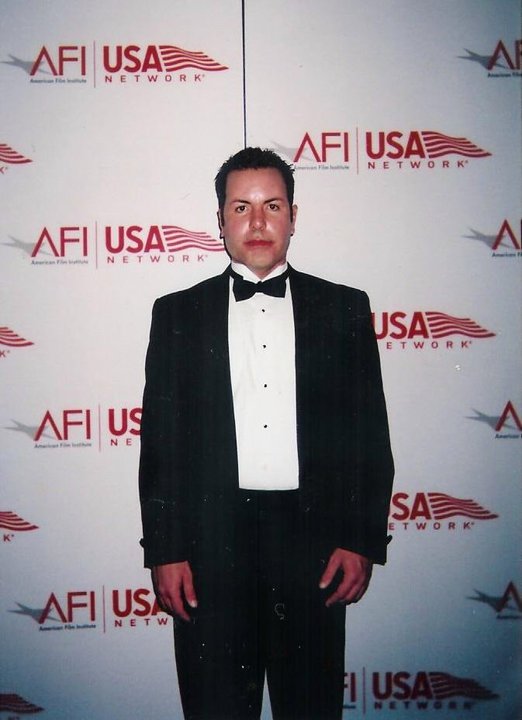 Welcome to a small sampling of the work of award-winning producer, director, narrator, musician, writer, and editor Mike Hubberd, founder of PFP.

THE FUSION IS HERE!

Primary Fusion Productions (PFP) has been around for over two decades producing top notch video production, musical composition, voice overs, and much more. 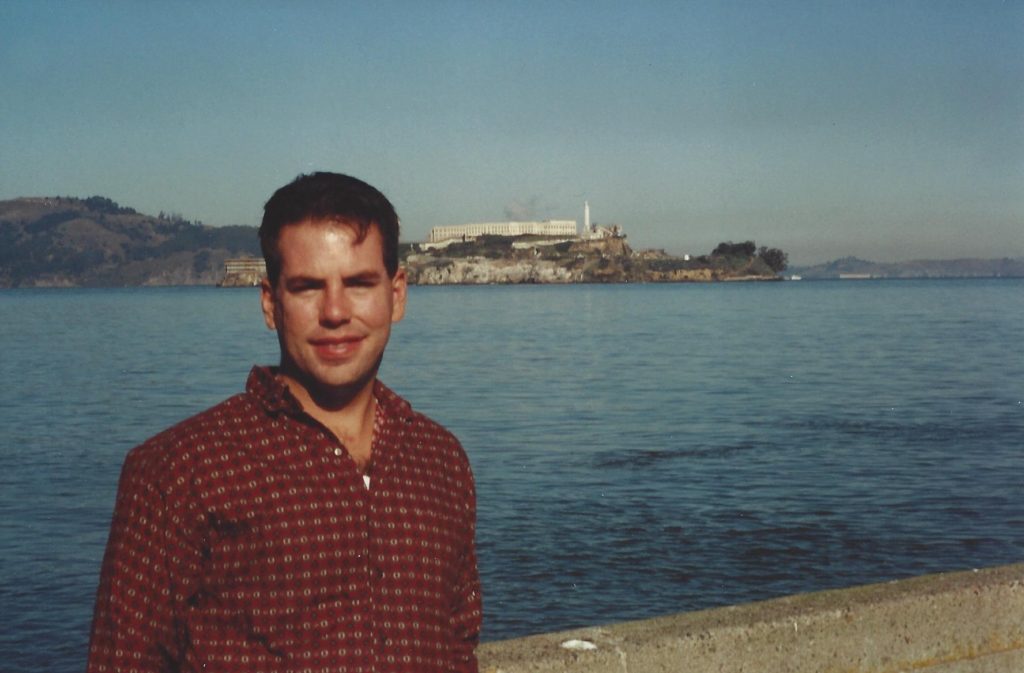 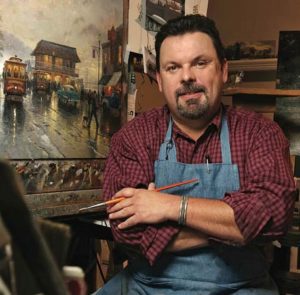 Thomas Kinkade, the ‘Painter of Light,’ lived and painted in Los Gatos, CA with his corporate offices in nearby San Jose.

Our first client was none other than Mr. Thomas Kinkade, the Painter of Light. During his time as an Associate Producer at QVC, Mike Hubberd got to know Kinkade on many Bay Area shoots and became a favorite of his during live TV broadcasts. Kinkade’s production company, Media Arts Group, Inc. (MAGI), contracted PFP to produce a World Vision TV special with Thom and guest Kathie Lee Gifford, back in the days when she really had her hands full from ‘Live with Regis & Kathie Lee.’ The special was scouted and produced in New York City– and from there our productions spring-boarded into corporate clients, TV stations, and special productions requiring a mad scientist or a bonafide genius–whichever was cheaper. 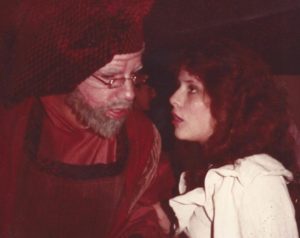 Taming the stage……..Mike as ‘Gremio’ in Shakespeare’s “The Taming of the Shrew.” 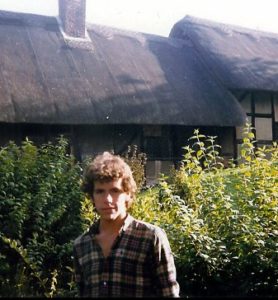 Before working in television, Mike first attended New York University….where he starred in several NYU student films. He also studied acting at The Royal Academy of Dramatic Art in London under BBC director Malcolm McKay. During this period, he met such stars as Sir Ian McKellen, Vanessa Redgrave, and Jonathan Pryce. Mike’s RADA training led to voice over work in England at Jo Pierpont-White animators– a production company for HBO Films—where ‘Paddington Bear’ creator Michael Bond personally directed Mike in studio sessions. Those voice overs eventually led to a trip to Scotland for the Edinburgh Fringe Festival. That early brush with success paved the way for a long and fruitful career in the entertainment industry.

“It seems to me that Television is exactly like a gun. Your enjoyment of it is determined by which end of it you’re on.” 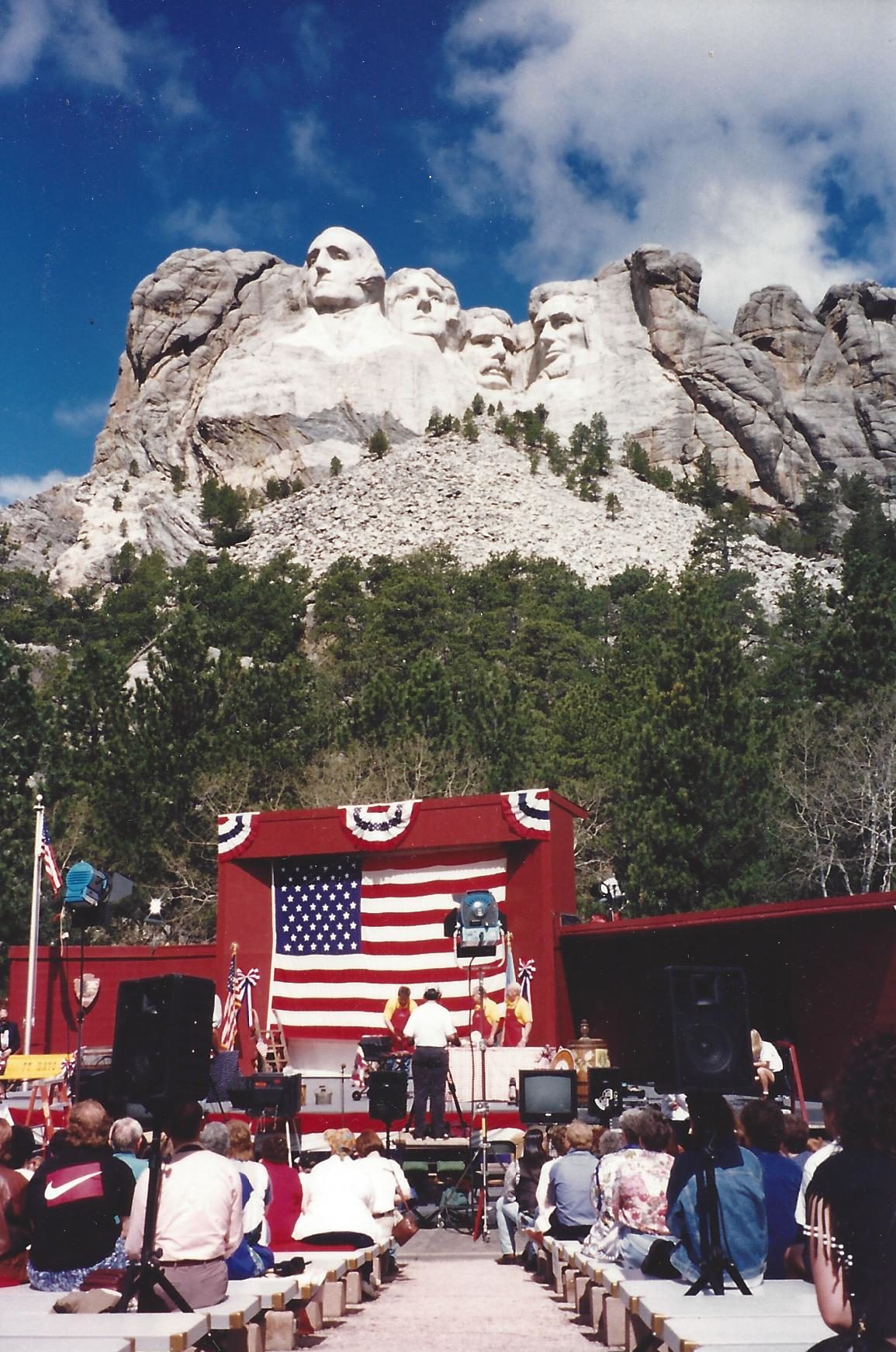 QVC’s Quest for America’s Best: 50 States in 50 Weeks Tour…with a patriotic stop on Memorial Day at Mount Rushmore in South Dakota. Years earlier, many of the set props from this broadcast were used in the Kevin Costner film, ‘Dances With Wolves,’ also shot in South Dakota. During the national tour, Mike produced live interviews and entertainment…along with production coordination and set decoration. Fifty states in 50 weeks was a monumental achievement for the network–so much so they did it all over again two years later! 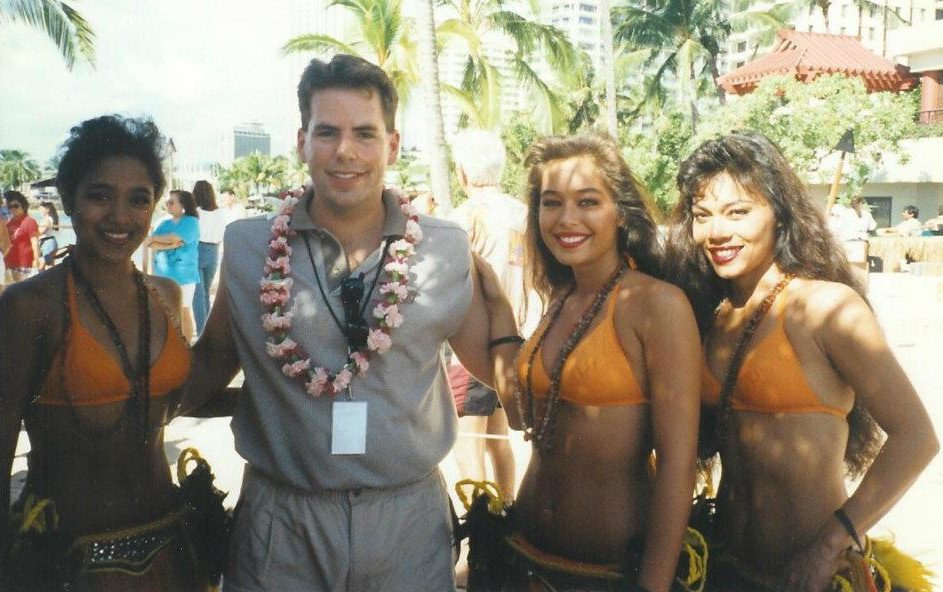 ALOHA! ….With the ‘Quest for America’s Best’ tour, Mike traveled to all 50 states multiple times, including Hawaii….where he worked with such island legends as Don Ho, Wyland, and The Brothers Cazimero over the years. 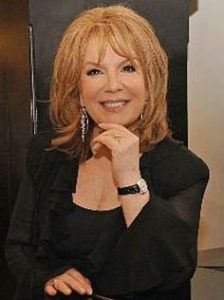 The first job in television for Mike Hubberd was a daunting one: Executive Producer of a local telethon in his hometown of San Antonio, TX. In that role, he lead local talent who were local legends….like radio DJ Sonny Melendrez, singer Vicki Carr, media mogul Red McCombs, sportscaster George McKenzie, pastor Buckner Fanning, and holiday hero Elf Louise. He wrote and produced a colossal broadcast–and even scripted commercials and directed San Antonio Spurs NBA All-Star Sean Elliott. Not a bad start for a career that has taken Mike all the way to the four corners of the planet– and back again. 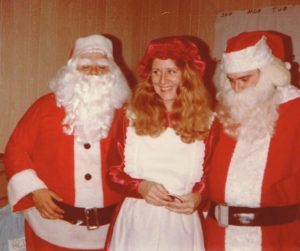 The Elf Herself……San Antonio’s living Christmas spirit has been embodied in ‘Elf Louise’ (Louise Locker) for nearly 50 years! In serving the community by helping her non-profit organization, Mike forged his way into Television.

With a successful track record of 20+ years in television production and live remote events, he also has extensive experience in living out of a suitcase. And… he’s adept at pulling rabbits out of a hat.

Despite that baggage, Mike is a proven winner at scoring successful ratings and creating water-cooler buzz with outrageous, outside-the-box programming ideas …delivering the goods with tangible winning results. Good TV doesn’t just happen; it has to be produced. And he knows how to craft magical moments and how to make projects sizzle. 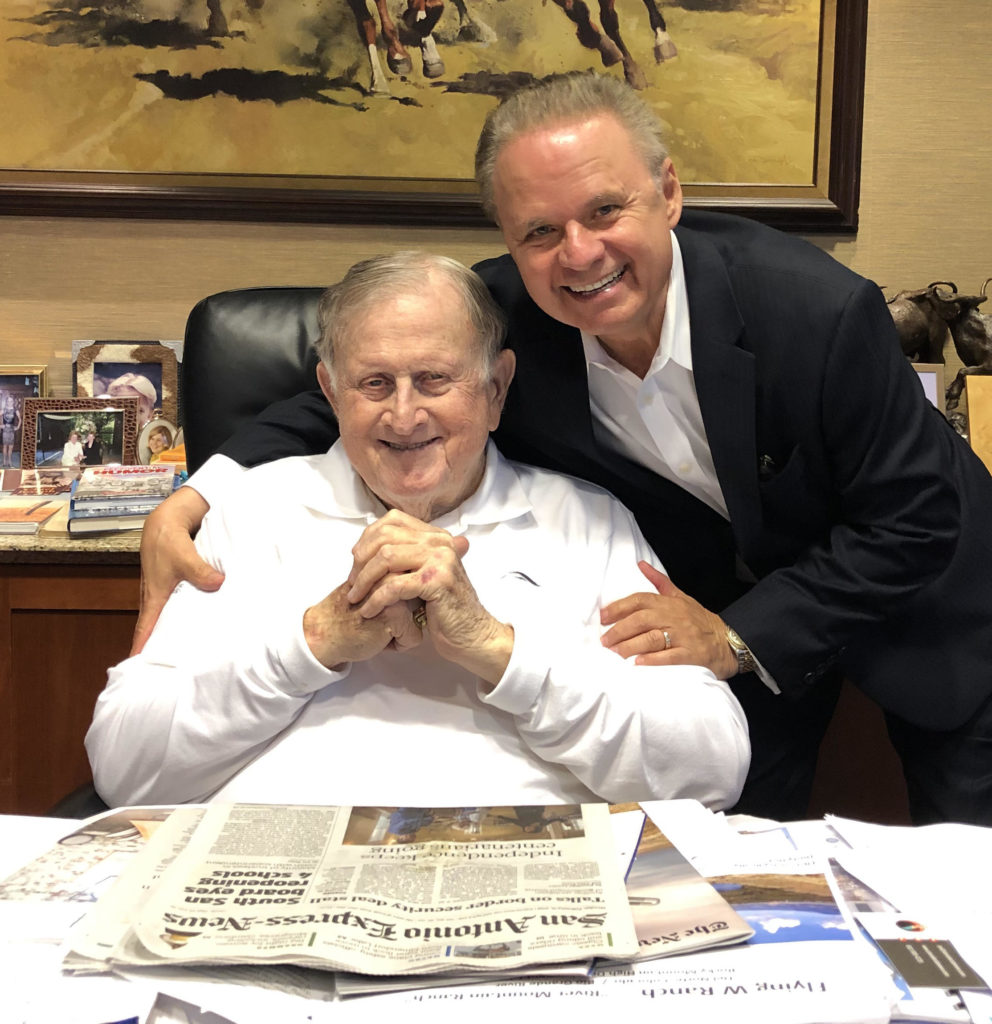 Still Legends……..Red McCombs, co-founder of Clear Channel Communications, and Sonny Melendrez, former Spurs emcee and radio DJ. At 91, McCombs is still going strong as an executive in San Antonio in 2019. He’s a former NBA and NFL owner, to boot. Melendrez, a man of many character voices for Walt Disney Studios, also continues to be a community ambassador and motivational speaker for multiple projects in the city.

“We specialize in doing what no one else can do.” 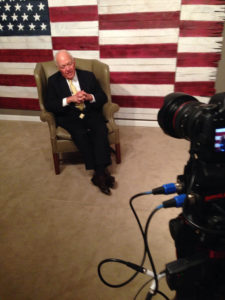 Under Mike’s mentorship, his associate producers, production assistants, and other employees have gone on to become Emmy Award-winning TV producers, journalists, and hosts– including some as national producers and reporters for ‘The Oprah Winfrey Show,’ ‘Dr Phil,’ ‘Entertainment Tonight,’ MTV, and Fox Sports.

“Specialized in Entertainment and celebrity interviews (I’ve obtained secrets from James Bond himself, Sir Roger Moore. I’ve made an Angel cry on camera. Well, one of ‘Charlie’s Angels.’ And, Oprah said ‘No!’ to me during an interview……. take that, Barbara Walters!) 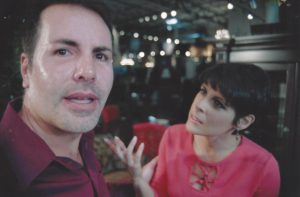 Acting Up….During a break on a shoot for the 2005 PFP production, ‘House Spectacular,’ for KHOU-TV, Mike as producer acted out a soap-style scene with Veep/Jane the Virgin actress GiGi Ernetta.

“Also thoroughly experienced with sports field coverage. And, knowledgeable in getting coffee for directors on-set. In addition, a lifetime musician singer-songwriter / multi-instrumentalist. (note: my lifetime, not the network) Oh, and I played “Crazy Train” on Brad Paisley’s guitar at Opryland in Nashville. (He no longer returns my calls) 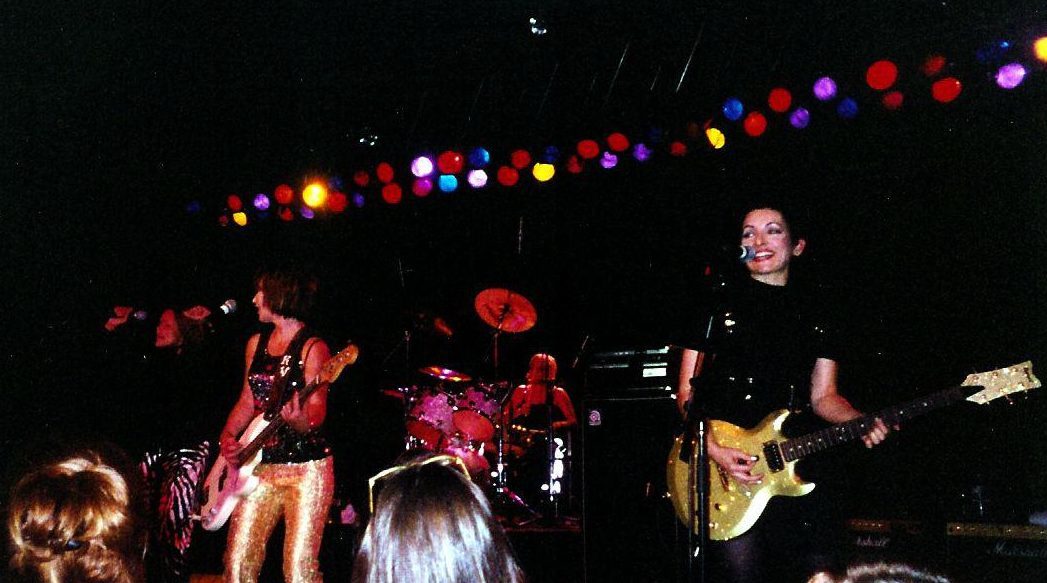 The Go-Go’s reunion concert on October 4, 1999 in New York created quite a buzz!

Indeed, Mike has an extensive musical background….having opened for national acts like A Flock of Seagulls, produced TV shows with Terri Nunn and Berlin, rubbed shoulders with The Cars’ frontman Ric Ocasek, and even partied with Blondie’s Debbie Harry.

“And yes, it’s true that I had a hand in The Go-Go’s reunion concert at the New York Marriott Marquis in Times Square back in 1999. (they don’t return my calls, either)

“Messaging begins with an audience…..unless you’re an Artist, in which case your art is your message– and your audience will find you.” 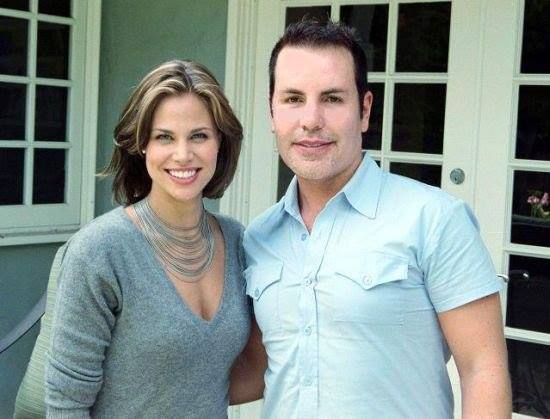 In the Spotlight…Back in Burbank interviewing actress and ‘The Chase’ game show host Brooke Burns at her home in Hollywood. Brooke even dished about former flame Bruce Willis in her tell-all interview.

GOING TO THE ENDS OF THE EARTH

“I’ve crossed the Arctic Circle and stood at the Polar Ice Cap at one extreme of the planet, and at the other…I’ve scuba dived to the depths of the Great Barrier Reef in Australia. There’s virtually no where in the world I won’t go to get the story.” 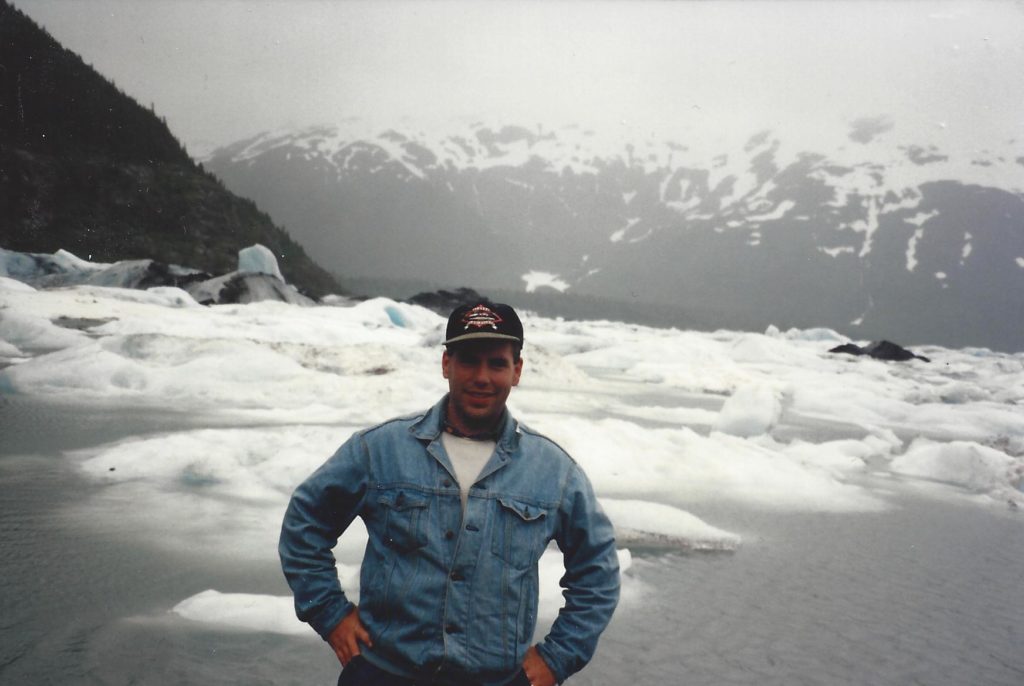 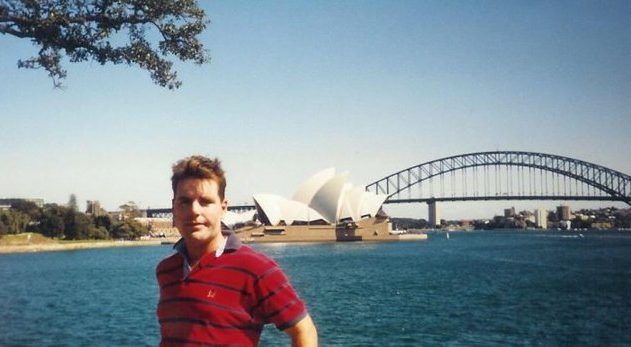 On location in Sydney Harbor prior to the 2000 Olympic Games from Sydney, Australia.

Yet, often the most touching, compelling, and captivating stories are the ones right in our own backyard. Whether it’s capturing raw emotion and gut-wrenching drama….or highlighting the lighter side of the funniest twists and turns to stories you won’t believe, it’s safe to say No One Tells A Story like Mike Hubberd.